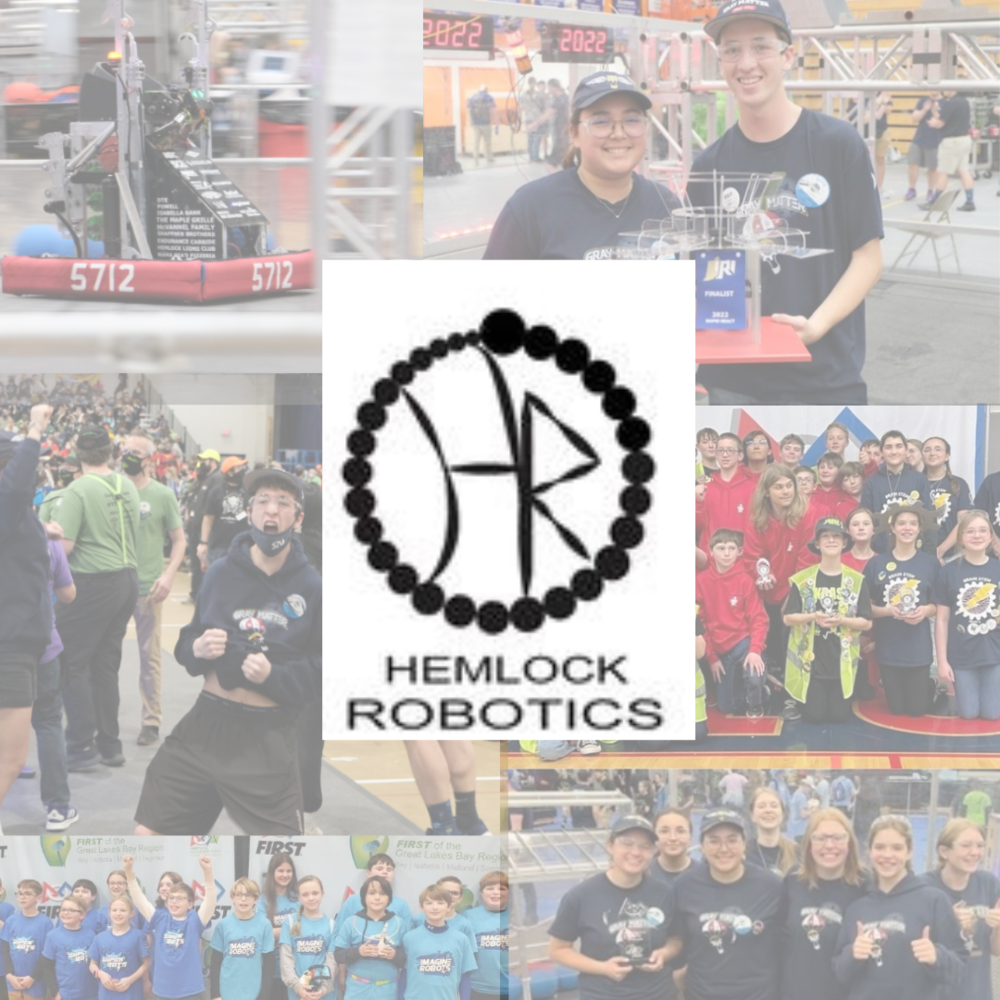 Hemlock Public School District is proud to recognize the accomplishments of the Hemlock Robotics programs over the past year. The growth and success of the programs have been contagious.

Hemlock High School Junior and Hemlock’s Gray Matter Drive Team Member Ana Rodriguez says, “I think it’s great that all of our teams can rise up and be successful at their events as it's a very rewarding experience. Nearly every night the Lockwood STEM Center is filled with elementary, middle, and high school students, parents, and mentors so the excitement level is really building for the next high school season. I can’t wait!!”

In January, Hemlock’s Gray Matter kicked off their best season in team history. Gray Matter would attend two District Qualifier events, Milford, where they finished 5th, and Midland where they would finish 1st and win the event. This was enough to qualify the team for the state competition at SVSU. The team had a strong showing at this event finishing 13th which was enough to qualify for the world championship down in Houston, TX. Only the best 456 teams in the world were invited to compete at the highly competitive world championship event. Gray Matter had an incredible event and ended up being on a playoff team for the first time in team history.

While the world championship marked the conclusion of the regular season, Gray Matter attended three offseason events to continue their momentum. First, the team was invited to the prestigious Indiana Robotics Invitational where 40 of the best teams in the world faced off. The team was thrilled with their performance as they made it to the finals in the playoffs. Next, the team made an appearance at the Bloomfield Girls Robotics Competition and had a blast. The team finished in 9th and also won the event. Finally, the team attended their “home” offseason event in Midland called Bot Bash and had a dominant performance finishing with a record of 12-1 while winning the event.

In August, the middle school team, BrainSTEM, and the lego league teams Imagine Robots and the Hemlock Super Bots kicked off their seasons. After a long build season, BrainSTEM attended their qualifying events at Freeland and Howell. The team performed very well at both events as they made it to the playoffs and qualified for the state championship for the first time. For the lego leagues teams, they put on a great showing at their event in Freeland and Imagine Robots received an invite to compete at the Michigan Lego League Championship. This was the first time a lego league team from Hemlock advanced to the next level.

Hemlock Robotics Mentor Alex Haltom says, “All levels of robotics are no joke, they require a lot of dedication from the students, families, mentors, coaches, and school district. It’s no secret that Hemlock Robotics continues their success, however. If you stop by the Lockwood STEM Center any evening during the week, you will see a building full of activity and excitement. The engagement from upper level students helping elementary students is nothing short of inspiring.”