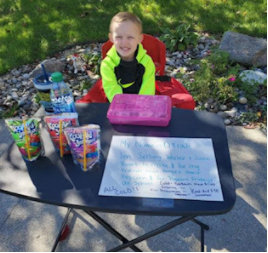 Hemlock Elementary kindergarten student, Dylan Scott, was excited to experience his first ever Popcorn Friday.  Along with the excitement came the realization that some friends forgot to bring money with them to school that day.  This sparked an idea in his little mind to keep this from happening again. 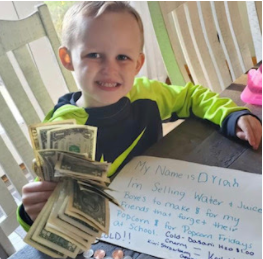 Dylan’s mom shared, “Friday afternoon, Dylan was feeling bad that some of his friends at school were sad they forgot their popcorn money.  He said maybe he could take some extra so he could share with them..  From that little idea, came his tiny fundraiser!  He made $53.00.”  Dylan said his friends wouldn’t go without popcorn on his watch.  During Sawdust Days, he set up a little stand and sold water and juice boxes during the community-wide garage sales.

His teacher Mrs. Bouchard said, “Dylan just radiates with kindness and never wants another friend to feel sad on Popcorn Friday.  Watching a kindergartener take it upon himself to raise funds so none of his classmates would miss out on a special treat each week just goes to show that our future is in good hands.  He is a ray of sunshine through hard times, and I couldn’t be more proud of him.”

Principal Gensch added, “This small act of kindness from one of our littlest Huskies, is just another example of why I am so proud to be a part of the Huskie Pack.  Even though they are small in stature, their hearts are immeasurable in size.”