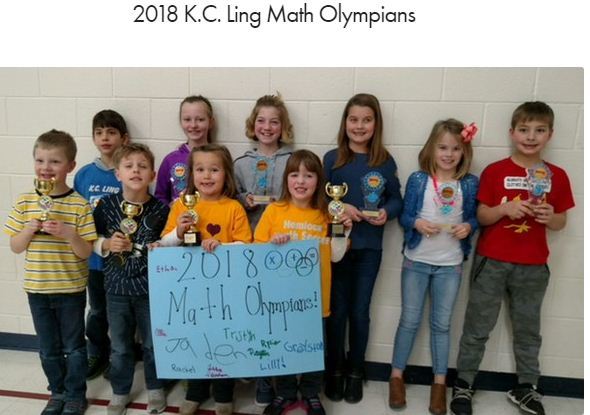 Math Month activities at Hemlock and K. C. Ling Elementary schools were in full swing during the month of January. The schools kicked off their third annual school-wide Math Month to help communicate the importance of math to the students and help them understand why math is so important in their everyday lives. The month was also devoted to showing students how much fun they can have with math, as well! Students participated in dress-up days and even had a special “Mathercise Day” where students were able to exercise while practicing their math facts.

According to MTSS teacher Missy Little, “We started Math Month to pump the students up about math and to create some fun activities to get them excited about what they were doing! And it worked! Students were lined up each morning trying to answer the “Math Questions of the Week,” and we saw them supporting one another with the grade level math challenge!”

Math Month wrapped up during a school-wide assembly to determine who the next Math Olympians would be. All grade levels, young fives through fourth grade, were given a math fact fluency challenge to practice all month long. Grade level teams were then formed and competed against each other during the assembly as their classmates cheered them on. Winners were able to take home trophies and named Ling Elementary Math Olympians for the 2018 school year!

According to fourth-grade student Ava Bethke, “It was fun, and I learned a lot of things. I liked when we had the assembly and grade levels challenged each other. Math Month challenged us to do more things in math.”